Christmas
in the
Village

This is the history of the Christmas in the Village event, held each year in Roscommon, Michigan.

Our story begins many Christmases ago…

During the Christmas holiday season, the Higgins Township Fire Department would decorate the large tree on the corner of Lake and 4th St. This is where the CRAF Center is currently located. Back then, it was still the Gerrish-Higgins Middle School. There was also Christmas caroling, organized by Jim Mahoney, who was the Roscommon High School choir director.

Through the years, it grew to include coffee, hot cocoa, cider and doughnuts.

To help encourage participation in the annual event, children were invited to participate in a coloring contest. About 1,000 copies of an outline drawing of a Christmas Tree were printed and passed out to elementary and preschool classes. Savings bonds were given to the winners.

You can get a Christmas in the Village coloring page to print, decorate and color just like these children did many years ago by clicking the download button. 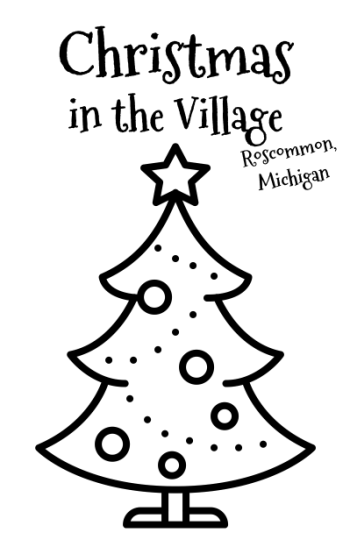 Growth Through the 1980s

The Christmas festivities continued to grow. In the mid 1980s, events took place all day Saturday and even some events outside the village. Some of these events included “Breakfast With Santa,” held at the Knights of Columbus Hall, sponsored by the Roscommon Cooperative Nursery School as a fundraiser. The Good Shepherd United Methodist Church of the North, located on County Road 103, also held a cookie sale at the church.

In 1994, Judy Kominek formed a committee called, “Christmas in the Village.”

At this time, the Village of Roscommon purchased the old middle school for $1.00 following the completion of the new middle school outside of town. The old building became a community building called the CRAF Center. The building was named by Joann Tyler. CRAF stands for Community Recreation Activities and Fitness.

That year, the first Candle Walk was held. The idea was provided by Judy Kominek, who had previously lived in Flushing, where the community also held a similar event.

The committee used an empty classroom in the CRAF Center and collected one gallon milk jugs. The group cut holes in the side of the milk jugs, filled the bottom of the jugs with sand and then inserted votive candles. Nearly 1,000 jugs were assembled that year, loaded on snowmobile trailers and set out Saturday at dusk along the four main streets leading away from the main intersection at Lake and Fifth.

The Christmas in the Village committee was made up of volunteers to help make this annual event more festive. The committee organized putting out burn barrels, roasting chestnuts, caroling and offering hayrides prior to the tree lighting. The addition of Santa coming into town to visit the children was an absolute necessity.

As the years passed, new ideas came in with each new volunteer who joined the committee. The Lions Club set up a grill in front of Ace hardware and with a donation of a canned good, you received a hot dog. The canned goods were (and still are) used to make baskets for the needy.

Businesses were decorated with beautiful lights and a craft show was held in the old Cherven drug store (which is now the Roscommon Village Hall).

Every year the committee tried to add new and exciting things to Christmas in the Village. Filling the cement flowerpots with greens, putting up a Santa House, a free concert on Friday night (consisting of local talent), and a bigger craft show were added.

Ice sculptures were added but due to unpredictable weather, the committee changed to wood carving demonstrations. Movie matinees were added for the children’ enjoyment, which were also free, with a donation of a canned good.

A Christmas parade called the “Electric Light Parade” was added in the late 90’s. It started with only 3 entries the first year, and now has over 30 entries, thanks to the imagination and creativity of local businesses, organizations and surrounding area fire departments.

Of course, Santa and Mrs. Claus always arrive at the end of the parade. 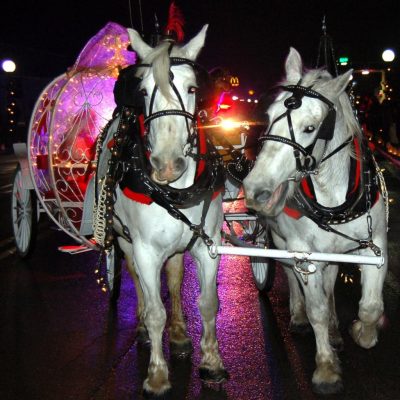 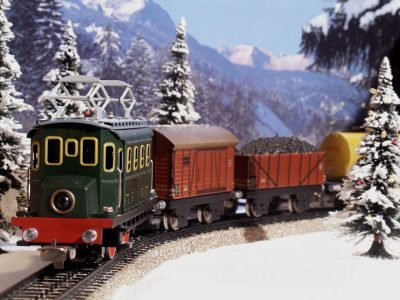 The Roscommon Model Train Club joined the festivities several years ago when the organization built model train displays and decorated store windows throughout the village with running model trains.

Currently, Christmas in the Village is held the first Saturday of December, each year. Most of the previously mentioned activities are still part of the ongoing tradition to date. The craft show now takes place in the CRAF Center and includes a Kid’ Corner for the children to make a Christmas gift. With the closing of the streets at 4:00 p.m., over 800 luminaries are added to make a beautiful scene.

The original tree is no longer healthy enough to be used as the Village Christmas tree, and therefore the two beautiful spruce trees, in the Village square, are lit by Santa and all the people after a group count down.

After the tree lighting the children are invited to visit with Santa and Mrs. Claus.

This wonderful, annual event could not happen without the year-round dedication and hard work of the Christmas in the Village committee.